This year I decided to do more with my router. The first step was to acquire a book many consider to be the "router bible": Woodworking with the Router, by Bill Hylton. I haven't had time to read it yet but it looks terrific. Shortly after, while leafing through the extraordinary Lee Valley catalog I came across an accessory that looked extremely intriguing: the MPower CRB7. After reading some rave reviews, I took the plunge. At the time, Rockler had a far better price than Lee Valley.

In my view, the CRB7 paid for itself in the first project I used it, where it allowed me to:

- cut mortises in short uprights
- trim edge banding of various thicknesses flush with the doors I'd applied it to (this function requires an attachment that is sold separately)
The CRB7 has a host of other features that I didn't use for that project, such as:

One of the features that will be useful in many situations (such as the mortises shown lower on the page) is the micro-adjustment, which lets you place the router or guide close to where you want it, then dial in the exact location with a knurled wheel.

On the picture to the right, you see how you can set up the CRB7's straight edge to ride against a guide. Normally you'd have to locate the guide precisely, but here you can just set it up "close enough" then make the adjustment on the CRB7. 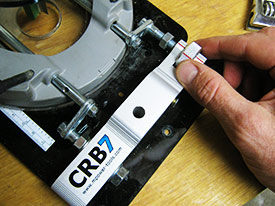 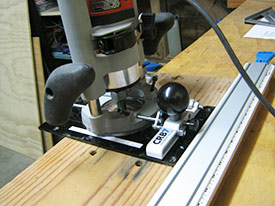 Fitting the Jig to the Router

Fitting the CRB7 to the Milwaukee 5616 Router

MPower was extremely helpful. As a solution, they suggested tapping holes from the top of the router base, and they went so far as to ship me some knobs and to help with the cost—a level of customer service unseen this side of 1990.

Before tapping, the machinist suggested I strengthen the base by filling some of the hollows. For this, I used some epoxy filler in the existing threaded holes, then some epoxy putty I had on hand for the larger gaps. 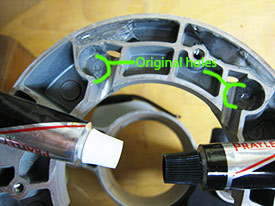 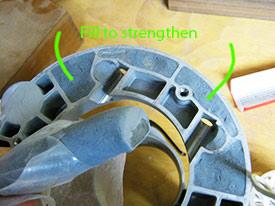 On the following pictures, you can see the CRB7 fitted to the 5616-20 plunge router base. I ended up using some cap screws because the beautiful knobs MPower sent me were too short for the holes. 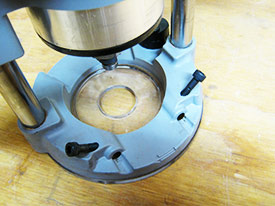 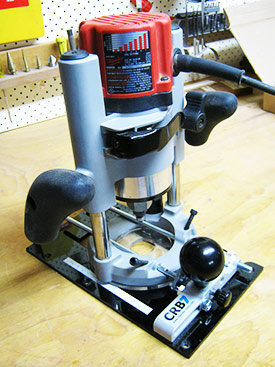 On the first project after receiving the CRB7, I wanted to cut a number of mortises in short uprights in order to make partitions in shelves. The CRB7 comes with an attachment that is perfect for this. I couldn't have done the job without it.

To cut mortises with the CRB7, you screw two metal cylinders into the base. These cylinders serve as guides on either side of the work piece. When cutting, you need to maintain a certain amount of torque so the cylinders keep in contact with the work.

For these short uprights, I held the work pieces in a vice. To set the exact location of the mortise, I set the router on top of the piece then used the micro-adjuster.

Here is the cutting process. 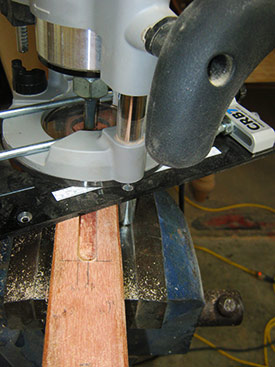 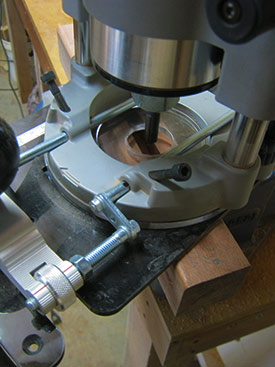 And here are the results. 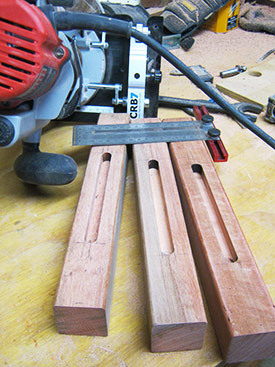 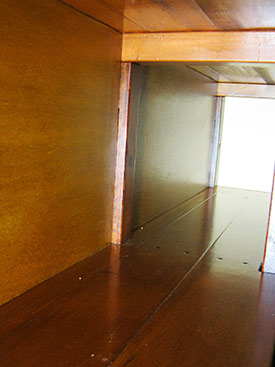 For this project I was converting two doors to an L-shaped desk. The doors where made of particle wood so I had to improve the edges. I cut some thick "banding" and used the CRB7's edge trimming kit (which is sold separately) to bring it flush with the doors. The colors look harsh on the "work-in-progress" picture but the final desk looks great.

For the thinner banding, I was able to use the optional bearing that mounts on the edge trimming kit and allows you to guide the router exactly where you want it. 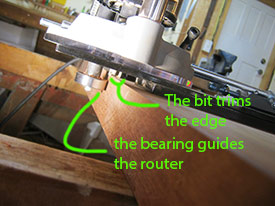 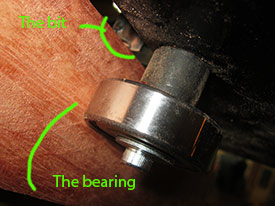 For the thicker banding, I had to ride free hand. With or without a bearing, I found that it was best to set up the router bit a smudge over the desk surface. The first picture shows how I do this with a playing card. The second picture shows the free-hand trimming. 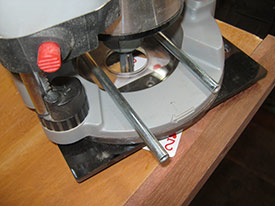 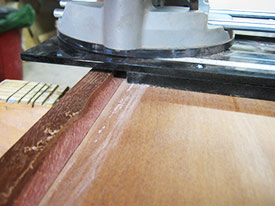 For this and other operations, it's critical to make sure the various nuts on the CRB7 are tight so you don't come out of adjustment. I learned to check that periodically as the nuts can come loose with the vibrations.

There are two ways to cut circles with the CRB7. 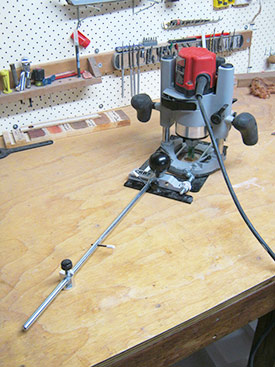 For larger circles, you screw several extensions together to make a pivoting arm. I haven't used this yet, but I set it up to take a picture. 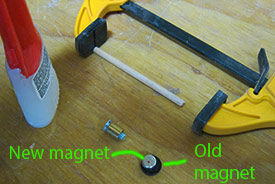 For small-radius circles, you screw a pivot to the base itself. The pivot is stored on the CRB7 with the help of a magnet. After a bit of use, my magnet came off, so I glued in a smaller but more powerful rare-earth magnet from Lee Valley. 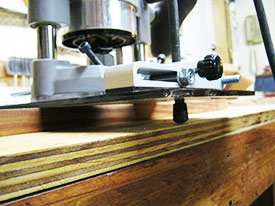 For narrow work pieces, you can screw a leg into the CRB7 to help stabilize the router. I haven't used it yet but set it up to take a picture. On the picture, the leg is short, but if you follow the rod to the other side of the base, you can see that there is room to adjust the leg for a much higher piece.

? Out of the box, the CRB7 has a few other features I haven't mentioned.
? A fence attachment is sold separately. I haven't used mine yet.
? If I understand correctly, MPower is working on new attachments.

I hope you enjoy your CRB7. So far, I'm loving mine: it's already held its promise to take my routing to a new level.

back to tool page